If vaccines are really useful, parents don’t have to be forced by legislation to have their children vaccinated.

Parents would voluntarily submit their young for “protection” but considering  the number of early deaths associated with multiple vaccinations, and the fact that the vaccines themselves contained live virus as confirmed by CDC website literatures, the government is now taking the blackmailing route using defunding of public schools as a threat.

Even doctors are not vaccinating their children knowing it would do more harm than good. So, when non-medical practitioner lawmaker introduces a bill seeking legislated mandatory vaccination, this lawmaker is not acting on his own volition but of the corporate interest behind all governments.

Considering the fact that children would learn more online than actually attending classes in conventional schools it would be wiser to keep our children at home where we can monitor their progress on their studies while effectively guarding their physical well-being.

This is exactly what this writer is actually doing for the last four years. He and his son have no regrets especially since they have access to the best healthcare insurance every home should have.

Taking these basic responsibilities instead of just trusting the Middlemen define the type of parents we really are.

You can view the bill online or download your own copy of the draconian bill here.

Draconian Vaccine Legislation Blackmails States: ‘All Children Must Be Vaccinated’

State of the Nation

SOTN Editor’s Note:
There is perhaps no greater threat to “life, liberty and the pursuit of happiness” than the “Vaccinate All Children Act of 2015” bill that is currently wending its way through the U.S. Congress.  The law, if passed, will essentially blackmail every state in the Union into mandatory childhood vaccine compliance.  It requires that every student be vaccinated according to the CDC recommended schedule (see schedule below) in order for the schools to receive federal grants.

This unlawful legislation is part of a two-pronged initiative that is being advanced by Big Pharma in tandem with the U.S Federal Government.  The second prong endeavors to vaccinate every adult according to a National Adult Immunization Plan.  Together, these two illicit attempts to blatantly violate the personal sovereignty of every American constitute a highly calculated Super-Vaccination agenda.

In the wake of the manufactured measles outbreak in California, there is now a very determined push to pass laws locking every citizen into a lifelong vaccine regimen.  This extremely harmful and oppressive usurpation of personal sovereignty must be resisted. No entity under the sun has the right to invade the human body the way that the systematic administration of toxic and dangerous vaccines does.

The U.S Federal Government, together with various state governments, seek to arrogate power unto themselves in order to impose illegitimate vaccine laws which are in contravention of natural law, common law and divine law.  Since these highly aggressive vaccination schedules clearly represent acts of outright chemical assault, they also represent state-sponsored violations of various federal laws and state statutes.  Therefore, it can asserted with absolute certainly that those respective governments are knowingly committing crimes against the citizenry.

Because vaccine-inflicted chemical trespass can result in serious physical injury, incapacitation and death, vaccination programs constitute gross violations of human rights, civil rights and constitutional rights.  Hence, every American citizen possesses the legal standing and statutory basis to sue in every jurisdiction which permits these crimes against humanity.  Certainly the time for massive and unparalleled class action lawsuits is long overdue.

The Vaccinate All Children Act of 2015: Bill Seeks to Blackmail States into Full Compliance 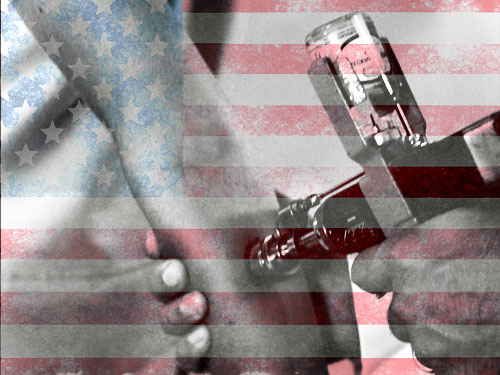 A Florida Congresswoman has introduced legislation that will send chills down the spine of any liberty-loving American.

REQUIREMENT.—For a State or a political subdivision or other public entity of a State to be eligible to receive a grant under this section, the applicant shall demonstrate to the Secretary’s satisfaction that, subject to paragraphs (2) and (3), the State requires each student enrolled in one of the State’s public elementary schools or public secondary schools to be vaccinated in accordance with the recommendations of the Advisory Committee on Immunization Practices.

Have you seen that vaccine schedule lately?

The Maine Coalition for Vaccine Choice made a very interesting point in their article about the bill (emphasis mine):

After trying and failing this year in more than thirty state legislatures to parlay a mild measles outbreak into a massive power and cash grab, the pharmaceutical industry will now simply bypass the states and go straight to Congress to force more Americans to become their customers.

I was going to present the following table to you in the work session on the vaccine bills, but I find it more appropriate to do so now. Below you will find the full current CDC recommended schedule. I have laid it out next to the vaccine schedule that we had from 1963 to 1988 (minus one dose of the small pox vaccine which was removed in 1973), so that you could see what the liability shield did to the vaccine program. I present it to you now to show you what Maine’s vaccine requirements for a public or private school education will be if we do not stop this industry juggernaut now.

That’s right: once Congress passed the National Childhood Vaccine Injury Act in 1986, the number of vaccines on the schedule increased dramatically.

And it will continue to grow. There are currently 271 vaccines in the development pipeline.

This bill is essentially an attempt to blackmail states into abandoning any vaccination exemptions they currently have in place.

Oh, and adults aren’t going to be immune from forced vaccinations for long either, if the government gets its way:

CDC has already made plans to begin to include adults in the same coercive net in which children are now becoming bound by using the Affordable Care Act and employers to vaccinate adults according to their National Adult Immunization Plan currently being drafted. This schedule adds 114 doses of vaccines to the list of an individual living the average American life span. Cradle to grave vaccination.

To emphasize, Americans born into this program, even if not one more dose is added to the schedule, will receive 184 doses of vaccine in their lifetime under this plan.

Wilson’s tyrannical bill was referred to the House Committee on Energy and Commerce.

Let’s hope it dies there.

Beyond just hoping, a proactive resistance must be maintained to defeat the deliberate extermination of humanity by the Chosen Few. Peruvian authorities have moved to reopen the investigation into allegations of the forced sterilization of thousands of indigenous men and women in the 1990s to reduce the country’s birth rate.

The program, under the government of then-President Alberto Fujimori, sterilized an estimated 350,000 women and 25,000 men between 1995 and 2000, and was focused largely on the poor and indigenous communities. If proven to be coercive, it would be one of the largest forced sterilization programs in recent history. Despite the fact that 2,073 women gave statements to human rights groups that they had had their tubes tied without their consent or knowledge, and despite the fact that at least 18 women are known to have died as a result, an investigation into the incident had previously and quietly been closed, while clearing the government of wrongdoing.

When a group of human rights organizations discovered the case had been closed, they filed a complaint in January of 2014.

A high ranking state prosecutor, Luis Antonio Landa Burgos, responded in a 56-page document dated April 29, that the investigation would be reopened and expanded to include new statements from other alleged victims of the procedures. He gave a timeline of three months for the new, wider investigation to be carried out.

Reports so far tell the stories of women who were coerced, threatened or outright deceived when they were operated on. For example, sometimes family members were used to sign consent forms in place of the woman herself, or an operation might be carried out without her knowledge after she had given birth. Activists also allege that some women were threatened with jail and that procedures were carried out in unsanitary conditions.

"I was three months pregnant when they did it.." http://t.co/9vZFMFJVzZ story of forced sterilization from #Peru. Support the @QuipuProject

“We’ve waited long enough for the government to investigate these 2,073 cases and hold ex-President Fujimori and his administration accountable for these reproductive rights abuses,” Maria Cedano, head of the Peruvian feminist organisation DEMUS, told Reuters.

Fujimori, who was president from 1990-2000, was sent to prison in 2007 on corruption and human rights charges and is still serving his term. It’s not clear whether he, or other particular individuals in his government, will be targeted in the investigation.

Fujimori’s daughter, who was considered a sort of honorary first lady during his presidency, is currently a front runner in Peru’s 2016 presidential race.

“There’s no specific statement in the notice that the investigation will look into them, but prosecutors have the obligation to investigate the contextual element… to see if there was a state policy for the forced sterilisations, involving the then responsible people from the government, which would be the president and the ministry of health,” said lawyer Monica Arango, who is the head of the Latin America and the Caribbean division at the Center for Reproductive Rights.

One successful case was brought against the government which, in 2003, had to pay $100,000 in damages to the family of 33-year-old Mamerita Mestanza, a mother of seven, who died as a result of a tube-tying procedure she was coerced into.

The most effective antidote to population explosion is free access to adequate education for all. Teach everyone to be more responsible and provide easy access to the basic necessities of life.